That jazz is considered the creative axis of any popular music in the world is not something new. What is new is to underline how, due to the importance of the routine-disrupting effect that cultures arriving from Africa have had, jazz has become ubiquitous, it’s everywhere. It’s music, of course, but it also makes its presence felt decisively in photography, cinema, painting and literature. This conference reflects these objectives and defines the literary sphere and influence of crime novels, or noir novels, in America and Europe.

Jazz and noir novels can be found with absolute naturalness in the work of many different contemporary writers. In the US, Chester Himes, Raymond Chandler, Malcolm Braly, David Goodis or Nat Hentoff. And in Europe, Boris Vian, Jean Patrick Manchette, Andreu Martín, Ferrant Torrent and Jordi Sierra I Fabra – the last three just happen to be Spaniards – are some of the writers who have found a home for jazz in their texts. 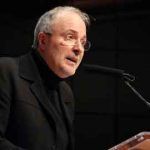 Luís Martín is a journalist. He has written for such publications as Actual, El Independiente, Vibraciones, Diario 16 or Vivir en Madrid, and he has directed music programmes on Radio 16, Onda Cero, Europa FM and Onda Madrid. He was a member of the Music Board of the INAEM (the National Institute of Performing Arts and Music) from 2007 to 2009 and he has been a music critic for the ABC newspaper since 1993. He is currently the Artistic Director of JAZZMADRID, Madrid’s jazz festival; the jazz critic for Scherzo magazine; and on Radio Clásica he directs and presents such programmes as Solo Jazz, Los Clásicos del Jazz y del Swing and El Mundo en Radio Clásica. He has published several books, including most notably, Bob Dylan and a volume of stories entitled Los Olvidados.