Just by their very name, the Caspian Sea, the Black Sea, the Baltic Sea or the North Sea seem to evoke scarcely explored landscapes. That’s why we are proposing a sonorous itinerary that we will share as if it were a radio programme in conversation with other aesthetic choices, such as the poetry or the black and white photographs that have inspired the founder of ECM, Manfred Eicher, during the five decades that he is celebrating this year, a perfect reflection of music by artists such as Arvo Pärt or Jan Garbarek. Music of evocative calmness based on landscapes of pristine sounds, like footprints in the snow or the wind among the trees. 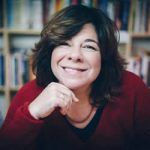 A career spanning more than three decades at RTVE, directing and presenting musical, cultural and news programmes for radio and television.  On Radio 3, the station she managed for five years, she has been directing and presenting every morning for the past more than twenty years, “Possible Music” (“Músicas Posibles”), music without labels, of every genre and era, interspersed with interviews and cultural contents. And over on RNE, “Let Life Come” (“Venga la Vida”), a collage of voices and poetry, philosophy, science and exquisite music.

Before the year is out, her second collection of poems will be published in the collection “The Word Grotto” (“La Gruta de las Palabras”), by Prensas Universitarias de Zaragoza. After she launched the second edition of her novel “Rust” (“Óxido”) in 2015, she published “Insects” (“Insectos”) in Papeles Mínimos Ediciones in 2017.